Below is a brief interview with David Pultz about the design of the headstone memorial at Green-wood Cemetery in Brooklyn, NY. A  few images are included; more can be seen in an earlier post or on our Facebook page–Meredith A.B. Ellis

Tell us a little about the process of coming up with the design for the headstone. What inspired you?

The inspiration came from the courage of the people at the Spring Street Church who stood against slavery and accepted people of different walks of life and ancestry into the congregation. I wanted to present text and symbolic imagery that represented that story. The ideas of how to arrange that, and in what media to use, evolved slowly as I thought about it over a period of months. I hasten to add that I made initial sketches and discussed ideas with my wife Elizabeth. Later in the process I also got valuable guidance from the memorial company in Brooklyn that handled the manufacture and delivery of the marker. Cost was a consideration as well. We had spent a fair amount for the reburial and subsequent memorial service. The remainder of our budget all went to the stone.

What do the different elements on the headstone mean or represent?

The stone is a vertical black granite slab that stands a little over five feet with the base. The top is at a somewhat diagonal slant. To me, the overall shape suggests the ancient standing stones found in the Orkney Islands of Scotland. That represents a kind of timelessness of human spiritual expression, at least in my mind. The granite is called “black mist” and is mined in Pennsylvania. 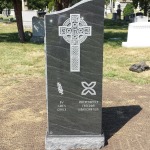 On the front face at the top is a quote from the book of Acts, “From one ancestor he created all nations to inhabit the whole earth…” In biblical terms, this stated what seemed to me was the prime belief animating the Spring Street Church’s opposition to slavery . One could argue that this also represented the highest ideals of the entire abolitionist movement. 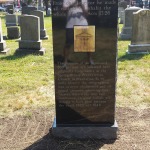 In the middle is a 19th century drawing of the church on a rectangular enameled steel plate, recessed into the granite. Below that is text telling the story of the church in brief summary. I got valuable help from Shannon Novak in shaping the information. 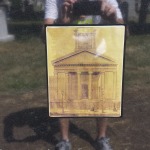 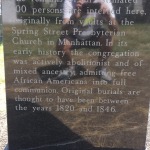 I didn’t want the reverse side to be blank, so I have a Celtic cross taking up at least half of the space. This is of course a Christian symbol, but also refers to the roots of the Presbyterian denomination in Scotland.

The two images below that are West African and come from Ghana and the Ivory Coast. They are part of a series of symbols used in that part of Africa called Adinkra. I chose the branch with leaves, which means “By God’s Grace” and the abstracted icon meaning “Independence, Freedom, Emancipation.” Both have reference to those of African ancestry buried there, but also in a wider sense to the whole congregation’s struggles during the early part of its history. 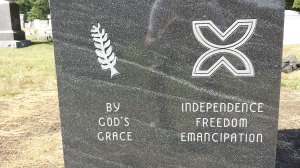 What is the significance of Green-wood Cemetery as the final resting place for the Spring Street congregants?

Green-Wood is one of the most historic and elaborately varied places of monuments and memorials in the entire country. It is kind of an over-the-top sculpture park begun in the mid-19th century where many famous people are buried. It’s also the area where Washington’s continental troops fought the Battle of Brooklyn in August 1776. A place that rich in history seemed appropriate to my committee as a reburial spot. Green-Wood is also a very expensive place. We were fortunate to find that the Presbytery of New York owns several graves there, which was highly convenient.

How do you hope that visitors feel when they see the headstone? What message would you like them to take away from the visit?

I would hope that they feel a sense of importance to the story connected with the people buried there, and that it represents the efforts of one small group that stood for human rights.

Additional images from the dedication ceremony: 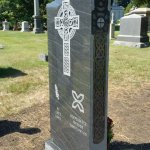 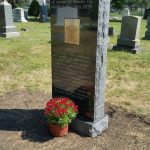 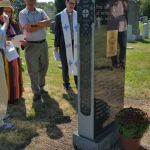 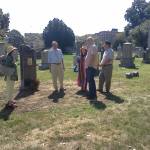 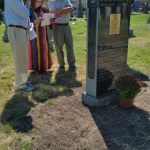