This is the third eulogy that was delivered at the Spring Street Memorial, held on Sunday, October 19th at 4pm at the First Presbyterian Church in New York City.

In the early spring of 2007, when I was working as a writing and composition instructor and volunteering in the laboratory of Dr. Shannon Novak at Syracuse University, Dr. Thomas Crist at Utica College contacted her and asked if she might be interested in helping with some skeletal analysis. And so the first set of remains from the Spring Street Presbyterian Church arrived at Syracuse University. I had been toying with the idea of returning to school to pursue my PhD in Anthropology, but I had little experience and no project in mind. When we began to work on this population, we had no idea how important it would turn out to be, no idea how much we would learn about life in the 19th century in New York City, and no idea how many people we would have a chance to study. And, I had no idea that it would launch my career in Anthropology. By the fall of 2008, I was back in school full time, working through the collection with Shannon Novak and the other student volunteers who would come to know these people so well.

As you have heard from Shannon, among the some 193 people buried in the vaults were approximately 70 children. It was these children that I studied. Inspired by the death of my own niece at the young age of 2, I wanted to understand the lives of the children who did not survive into adulthood, and whose parents buried them with love in the vaults of the church. We have been able to learn so much from their brief lives—the bone of children, as it is rapidly growing, records the immediate environment to which the children were exposed, even better than the more slowly turning over adult bone. They have been able to provide us with a great deal of information about what it was like to grow up in the urbanizing, industrializing, and diversifying city of the early 19th century.

It was, not surprisingly, challenging. The children’s remains tell us that life was not easy at all. Of the approximately 70 children who were buried in the vaults, over 40% died in their first year of life. Another nearly 30% died by the time they were five. These youngest children were certainly some of the most vulnerable in the city; waves of infectious disease swept through New York, taking the lives of even several of Reverend Cox’s children, three within a few days of each other. Their burials at the church were presided over by the Reverend Ludlow.

While the remains do not tell us specifically how the children died, they do tell us what the children experienced in life. Preliminary molecular analyses suggest that some aspects of parenting were affected by the parents’ socioeconomic status. Some children appear to have been weaned quite young, perhaps so that their mothers could return to work. Other children were older, nursed for a period of time in keeping with middle class parenting manuals that were ubiquitous. Further stable isotope analysis will allow us to address this question more fully, and begin to better understand how family life was changing with the advent of market forces and wage labor in the city.

We also know from the remains that many children suffered from a lack of access to resources. Over 30% of the children had rickets at the time of death. Rickets is a vitamin D deficiency. We synthesize most of our vitamin D from access to sunlight, but in these northern latitudes where sunlight is scarce in winter time, food sources are also important. Access to adequate vitamin D through breast milk and then through fish and some dairy products may have been limited. In the children’s remains, signs of rickets include bowed legs and weakened and compromised bone that fractured easily. We see other deficiencies too, including cases of scurvy, or vitamin C deficiency. The hard-working members of this congregation may not have been able to afford the resources necessary to stave off these conditions in their youngest family members.

Other, less specific conditions show up as well. Cases of periostitis, or inflammation of the sheath that surrounds the bone; cranial lesions that may indicate meningitis or tuberculosis; dental disease from easy access to sugar and starches; and even the occasional injury, including one little two and a half year old with a healing wound to the left side of his head.

Perhaps no one skeleton highlights the complexity of childhood health in this collection better than that of a five year old child that was found in Vault IV. The child’s skeleton is marked by rickets; the leg bones are very obviously bowed, the rib ends are flared, and even the arms are a bit twisted. The child’s mouth is also telling; several of the child’s baby teeth have rotted out from widespread cavities. And yet, while this may suggest a child that was ill, and to some extent suffering, we also have to note that the bowed arm and leg bones appear dense. This does not, in other words, appear to be a malnourished child. In fact, the poor teeth suggest this was a child with access to many food resources, including likely sugary treats and beverages. And so while the child ultimately did not survive into adulthood, it is very possibly that in life, the child was a member of a family of some means.

No matter what the challenges were for children in the city in the early 19th century, we know that their parents and the church valued them. Of the 53 coffin plates that were recovered, 10 were for children. The only pure silver coffin plate was for a child, one Oswald Williams Roe, who died at 10 months and 5 days of age. His uncles were silversmiths, and likely crafted his coffin plate. Then there is the coffin plate for Edward Dorr Griffin and Alexander Roe Cox, two of Reverend Cox’s sons who died within a day of each other. We also have coffin plates for J.W. Root, a four month old whose father was a fur merchant, and Miles Ray, a one year old whose father was a doctor.

The fact that some children had these coffin plates, including the only silver one, may reflect the growing association between children and purity and innocence at the time. This belief in the purity and innocence of children is also obvious in the value the pastors and congregants placed on educating the children. Buried among the remains in the vaults are those at least one teacher, Joseph R. Murden. And, both the Reverends Cox and Ludlow were ardent supporters of the mixed-race Sunday school the church ran, one of the few such institutions in the city, and one of the earliest that was mixed-race. The Reverend Cox said that children were like twigs to be nurtured into blossoming adults, and that they are “at the happiest moment of human life…” (1823:29). The Reverend Ludlow gave a sermon on the importance of Sunday schools, during which he proclaimed the purpose of Sunday schools to be “To institute the principles of the Bible into the youthful mind, and to bring to bear a hallowed, sanctified influence, upon beings whose intellects are just beginning to expand….The Suspects to be operated upon are in the most favourable[sic] circumstances that can be imagined. Just starting into being, they have as yet contracted no stubborn habbits [sic] + imbibed no inveterate prejudices.” (Ludlow n.d. 3-5). He called children “buds of paradise” and clearly valued their growth and role in the church, praising their efforts to evangelize and spread the good word throughout the city.

And so I wonder if the Reverends Cox and Ludlow would be pleased to know that the remains of the congregation from the vaults continued to have an important role in education today. In the 7 years that they were studied at Syracuse University, they helped train some 22 students in the field of bioarchaeology, some of whom are here today. Corie Maddox, who is here today, trained on these remains, and now works as a Clinical Research Coordinator at Syracuse Orthopedic Specialists. Several students have gone on to pursue their own PhDs, including Sarah Heins, who did an undergraduate honors thesis on the collection, and is currently studying at the State University of New York at Albany. And John Crandall, now doing a PhD at the University of Las Vegas, Nevada, who couldn’t be here today, but wrote about these folks saying, “Thank you Spring Street Presbyterians, abolitionists and activists of your time. Because of you, I became a bioarchaeologist. Because of you, I am a historian. Because of you, I am invested in studying inequality.” The Spring Street remains not only taught these students about the past, but gave them a start in their professional lives. And they have done the same for me. I defended my dissertation on the children this past May and completed my doctorate. A month later, the remains were collected from Syracuse University and reburied in Greenwood Cemetery. And so, I feel as though these individuals and I were on a journey together—they the teachers, me the student. And I will forever be grateful to them, and to you, the descendants, the Presbyterian community, and supporters like David Pultz, who gave us all a chance to learn from their lives. And even though their bodies are reburied, they still have much to teach us, and we have so much more to learn from them. We have archives to search, molecular analyses to perform, and ultimately, their amazing stories to tell. 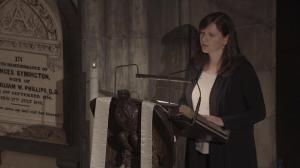