This is the first of three eulogies that were given at the Spring Street Memorial Ceremony, held on Sunday, October 19th at 4pm at the First Presbyterian Church in New York City.

In early January 2007 I was asked to be part of a small contingent to visit a construction site at the south-east corner of Spring and Varick Streets. It was a bright, crisp sunny day. As digging began the previous month for the foundation of a new building, old burial vaults with human remains from the early half of the 19th century had been discovered. It was the site of the former Spring Street Presbyterian Church. There were shelter tents covering an area in which four vaults contained the remains. They were being studied and catalogued by archaeologists for eventual removal.

I was soon invited to become part of the Presbytery’s new Spring Street Committee, then headed by Executive Presbyter Arabella Meadows-Rogers. Under her leadership the Presbytery accepted responsibility for finding a suitable reburial spot for the remains. The committee’s mission was now clear, but it turned out to be a long process. Two years later Arabella tragically died from cancer and I was appointed chair of the committee. This past June the people of the Spring Street Church – representing a recently revised estimate of 190 individual burials – were finally laid to rest at historic Green-Wood Cemetery in Brooklyn. A simple graveside service was led by Rev. Agnes Blackmon, one of the committee members. I’d also like to mention at this time the other two members – Ellsworth Stanton and Diana Pardue. I thank them and the officers, staff and trustees of the Presbytery of New York for their steadfast support.

The seven year journey was certainly a tangle of legal and procedural steps that couldn’t have been negotiated without able assistance from our attorney Frank Patton. But what stands out most is that it was a journey of discovery – of learning about this congregation’s brave opposition to slavery in the 1820’s and 30’s and of the fascinating archaeological revelations that resulted from study of the contents of the vaults at Utica College and especially Syracuse University.

The corner stone of the Spring St. Church was laid July 5th, 1810. Among those present was the Rev. John Rodgers, long-time pastor at First Presbyterian on Wall Street. A year later the church opened for services. Its hard to imagine today, but at that time the area at Spring and Varick Streets was the country side. Northward urbanization hadn’t yet arrived. But with the New York Commissioners Street Grid Plan newly in place, in a few short years it would.

Starting in 1820 with the installation of its second pastor, the Rev. Samuel H. Cox, Spring Street became notable as a congregation advocating the immediate abolition of slavery. In addition, free African-Americans were admitted into full communion. It was an integrated congregation, and by 1823 it had an integrated Sunday School. A number of years later, in 1834, Cox would write to the editors of the New York Evangelist newspaper, “I assume it as practically certain that the blacks and the whites, or the African and European races of men, are to exist together on this continent – till the morning of the resurrection; and also that slavery cannot co-exist with the descendents of these two races, cannot exist at all, much longer. It must certainly be destroyed – and we all know that.” It was a prescient statement, but it would take almost another thirty years for it to happen.

In 1825 Rev. Cox left to form the Laight St. Presbyterian Church along with former members of the Spring St. Church. It was a devastating blow, but the 43 congregants that remained purchased the building from the Presbytery and reorganized as “The New Spring Street Presbyterian Church – a free church for the people.” As the neighborhood grew, the congregation nevertheless survived and grew along with it. In 1828 the Rev. Henry G. Ludlow, also known for his strong abolitionist views, became pastor. In November that year he wrote to his sister Caroline that the church’s congregation numbered more than 330 individuals, “most of whom belong to that class of person who cannot afford to purchase or hire a pew in our city churches.”

By 1833 the call for immediate abolition became organized under formation of the American Anti-Slavery Society. Started by Boston newspaper publisher William Lloyd Garrison and two wealthy silk merchants, Arthur and Lewis Tappan, it became a who’s who of early abolitionist figures – both black and white – including Reverends Cox and Ludlow. The organization was the real start of the movement that eventually spread throughout the northeast prior to the Civil War – and it was based here in New York.

One more piece of history – In July 1834 there was a violent reaction in New York against this organization and its goals. It started through a series of events, including a statement from a lecture by Cox published in a newspaper saying that Christ was probably “of a dark Syrian hue…” Vicious and largely unsubstantiated rumors were also published in the Courier and Inquirer newspaper about the Spring St. Church and abolitionists – that Rev. Ludlow was performing interracial marriages, that Arthur Tappan had divorced his wife and married a Black woman, along with a number of other incendiary rumors. The result was three days of rioting by several mobs, targeting homes, businesses and houses of worship associated with the anti-slavery movement. The Spring Street Church was attacked by a mob on July 11th. Shouting, “Let’s wipe out the Presbyterian barn” according to newspaper reports, the mob entered the church through smashed windows and destroyed much of the interior. They tore out pews, galleries and the organ and piled them in the street, which served as a barricade against the advancing National Guard. The Laight St. Church was likewise attacked as were the homes of Cox and Ludlow. The abolitionist movement – and the Spring Street Church – survived however, only to grow stronger in its opposition to slavery.

When we think of a memorial service, we normally think of it for a single person most of us knew. Today we gather to memorialize some 190 people. Of that number only 38 names are known to us, and of that number, only two names can be matched with a skeletal remain. Who were these people? Most were apparently fellow New Yorkers from the immediate neighborhood surrounding the Spring St. Church. They lived and died nearly two hundred years ago. They were merchants and dock workers, seamstresses and domestic workers. Mothers and Fathers and Children. In short, a mix of middle and lower income residents, both black and white.

There was Rudolphus Bogert, a merchant and volunteer fireman, husband and father who died at the age of 76 and who’s miniature portrait was found to be in the collection of the Metropolitan Museum of Art. There was Louisa Hunter, who’s father was assistant superintendant for the New York Almshouse and died nearing 17 from an undetermined illness.

A few were not congregants, like the U.S. Senator from Georgia, Nicholas Ware, who had traveled to New York in 1824 and died here later that year. He was reported to have been interred at Grace Episcopal Church in Queens, but a coffin plate with his name was found in the Spring St. vaults.

The discovery of the burial vaults and the subsequent research and study of the remains – whom we’ve come to call the people of Spring Street – has added substantially to our knowledge of some of the details of their lives. That research and study is ongoing. Its thanks to Drs. Shannon Novak and Meredith Ellis – whom you’ll hear from later – and others at Syracuse University, that we can now share this knowledge.

Some of you who know me, know I have something of an amateur’s interest in history. This has been a very special project – one that has necessitated learning the story of a congregation who bravely took a stand against slavery, arguably the most divisive and important social justice issue of its day. Learning about history really does make it come alive. And one of course learns from history if we properly understand its lessons. The oft-quoted line from one of William Faulkner’s novels comes to mind – “The past is never dead. It’s not even past.”
So today we gather to honor not just the dead, but the living history of a congregation that stood on the ground floor of the early 19th century abolitionist movement. It was a time when the call for the complete and immediate destruction of slavery was in stark contrast to the prevailing culture.

As I look back on the seven years it took to find an honorable place of reburial – and Green-Wood Cemetery was really first choice of my committee – I think about the journey of the people of Spring Street. From those modest early 19th century vaults in lower Manhattan, across the East River to the hallowed ground of Green-Wood, where Washington’s Continental troops fought the Battle of Brooklyn in late August 1776. Its wholly appropriate. The people of Spring Street helped fight the battle against injustice in their day. They are now rested where they rightly belong, and it has been my privilege to have escorted them on that journey. Let us today reclaim the precious heritage that has been passed to us – one of human rights and social justice.

The words of a poet come to mind. This time, Walt Whitman, from part of a longer work that lives in the hearts of many New Yorkers-

Crossing Brooklyn Ferry
Flood-tide below me! I see you face to face!
Clouds of the west—sun there half an hour high—I see you also face to face.
Crowds of men and women attired in the usual costumes, how curious you are to me!
On the ferry-boats the hundreds and hundreds that cross, returning home, are more curious to me than you suppose,
And you that shall cross from shore to shore years hence are more to me, and more in my meditations, than you might suppose.
It avails not, time nor place—distance avails not,
I am with you, you men and women of a generation, or ever so many generations hence,
Just as you feel when you look on the river and sky, so I felt,
Just as any of you is one of a living crowd, I was one of a crowd,
Just as you are refresh’d by the gladness of the river and the bright flow, I was refresh’d,
Just as you stand and lean on the rail, yet hurry with the swift current, I stood yet was hurried, 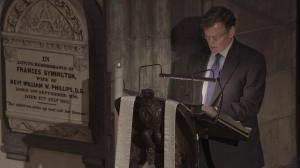